Yorgos Archimandritis is an author and a cultural radio and TV host. He was appointed Cultural Ambassador for the French Presidency in the European Union in 2008. He was awarded Knight of Arts and Letters (2010) and Officer of Arts and Letters (2019) by the French Republic. In 2021, he was appointed Cultural Ambassador of the Hellenic Foundation for Culture in Paris.

He is the author of Danielle Mitterrand-Word by Word (Le Cherche Midi Editions, Paris). His book Mikis Theodorakis by Himself, on Greece’s most famous composer and Theo Angelopoulos-The Time Suspended, his conversation book with Palm d’Or awarded film director Theo Angelopoulos, are published by Actes Sud Editions in France and by Patakis Publishers in Greece. His books Melina-A star in America, (co-authored with Spyros Arsenis) on the international career of famous Greek actress Melina Mercouri, Yannis Behrakis-With the Eyes of the Soul, a conversation book with Pulitzer Prize awarded photojournalist Yannis Behrakis, and Titos Patrikios-A part of the truth to lift, a conversation book with Titos Patrikios, the most prominent Greek poet of our times, are published in Greece by Patakis Publishers.

He has a PhD in Comparative Literature (Sorbonne University) and is the author of “The Orpheus Myth in 20th Century Drama and Cinema.” 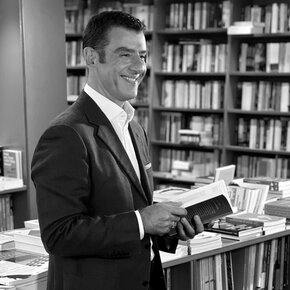