Victor Ehikhamenor is a Nigerian multimedia artist, photographer and writer. He has been prolific in producing abstract, symbolic and politically/historically motivated works.

A 2020 national artist in residence at the Neon Museum, Las Vegas, Mr. Ehikhamenor is also a 2016 Rockefeller Foundation Bellagio fellow. He has held several solo exhibitions and his works have been included in numerous group exhibitions and biennales, including the 57th Venice Biennale as part of the Nigerian Pavilion (2017); the fifth edition of the Mediations Biennale in Poznan, Poland (2016); the 12th Dak’Art Biennale in Dakar, Senegal (2016); and Biennale Jogja XIII, Indonesia (2015).

As a writer, he has published fiction and critical essays in various academic journals, magazines and newspapers around the world, including The New York Times, The Washington Post and Guernica magazine, as well as the BBC and CNN online.

Mr. Ehikhamenor is the founder of Angels and Muse, a thought laboratory dedicated to the promotion and development of contemporary African art and literature in Lagos, Nigeria. 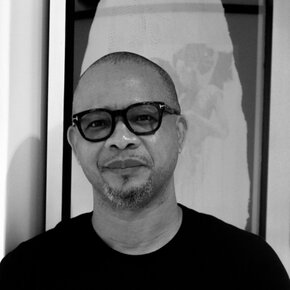