Massimiliano Gioni is artistic director of the New Museum in New York City and director of the Nicola Trussardi Foundation in Milan. He has curated numerous international exhibitions including the Venice Biennale, which he directed in 2013, the Gwangju Biennale, South Korea (2010), the Berlin Biennale (2006) and Manifesta 5 (2004).

He has recently curated a major retrospective of George Condo's work for the Long Museum in Shanghai and was part of the curatorial team — with Naomi Beckwith, Glenn Ligon and Mark Nash — that staged the exhibition "Grief and Grievance: Art and Mourning in America," originally conceived by legendary curator Okwui Enwezor for the New Museum.

Mr. Gioni has organized two major exhibitions with Jeff Koons: "Appearance Stripped Bare: Desire and the Object in the Work of Marcel Duchamp and Jeff Koons, Even" at Museo Jumex in Mexico City (2019) and "Jeff Koons: Lost in America" at Qatar Museums Gallery – Al Riwaq in Doha (2022).

A frequent collaborator with the DESTE Foundation for Contemporary Art, he has worked on numerous projects in Athens and Greece with Dakis Joannou and his collection. His most recent project was "The Greek Gift" at the DESTE's Slaughterhouse Project Space in Hydra in 2021. 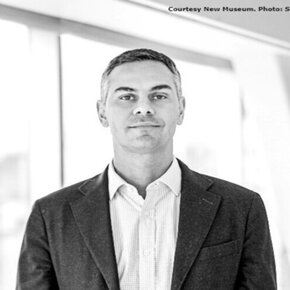