Born in New York and based in Los Angeles, Liza Lou is an artist who, for the past 30 years, has made sculpture, paintings, drawings and room-size environments that induce states of wonder, beginning with the groundbreaking “Kitchen” (1991-1996) — a solid beaded room-size environment now in the collection of the Whitney Museum of American Art. Other large-scale sculptures include “Back Yard” (1996-1999) in the collection of Fondation Cartier pour l’Art Contemporain, which consists of over 250,000 handmade blades of grass made of beads and “Trailer” (1998-2000), a film noir tableau made of glass beads contained inside a 40-foot trailer home, now in the collection of the Brooklyn Museum of Art.

From 2005 to 2020, she lived and worked in Durban, South Africa, where she founded an art studio that included a women’s advocacy program — the first of its kind to combine social practice within an art studio setting, offering interest-free loans, paid scholarships and other support systems for her studio team.

Examples of the wide range of Ms. Lou’s work include “Offensive | Defensive” (2008), a monumentally scaled prayer rug that breaks down into lush abstract pattern and was included in the group exhibition “Less Is a Bore” at the Institute of Contemporary Art Boston (2019). Another sculpture is “Continuous Mile” (2008), a mile-long rope comprised of meticulously woven glass beads, which was included in the “Less is More” exhibition at Museum Voorlinden in the Netherlands (2019.) Her written and performance work includes the solo film “Born Again” (2004), “Durban Diaries” (published by White Cube, 2011) and “Drawing Instrument” (2018), a single-channel video that records the harmonics of the artist’s drawing and meditation practice.

Ms. Lou is the recipient of the MacArthur Foundation fellowship and an Anonymous Was a Woman Award. Skira Rizzoli recently published a comprehensive monograph on her career and Galerie Thaddaeus Ropac will mount a solo exhibition of the artist’s new work in Paris in spring, 2023. 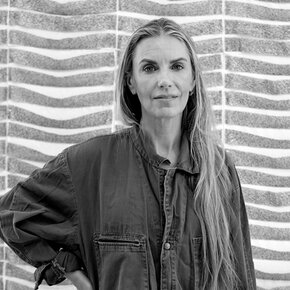