Brunello Cucinelli was born in 1953 into a peasant family in Castel Rigone, a 15th-century hamlet near Perugia.

After obtaining a diploma as a building surveyor, he enrolled to study engineering but dropped out to set up a small cashmere-dying company. After witnessing his father’s hardships at work as a boy and being a close observer of the world, he developed his dream to promote a concept of work that ensured moral and economic human dignity.

This is key to understanding his personality and the success of his business, which he considers not only as a wealth-generating entity, but also as a framework to develop and nurture his dream of a style of capitalism that enhances humanity. His knowledge of the great figures of the past has influenced his dreams and ideals, but he is always looking towards the future; each of his actions and accomplishments is designed to last for centuries.

In 1982, Mr. Cucinelli moved to Solomeo, where he built his success as an entrepreneur and humanist. In 1985, he purchased a 14th-century tumbledown castle in the hamlet and made it into his corporate headquarters. In 2000, he acquired and refurbished an existing facility nearby to meet growing demand for his products and subsequently opened Solomeo’s Forum of the Arts, built exclusively by Umbrian craftsmen.

In 2012, he listed the company on the Milan Stock Exchange in a move was not driven by financial reasons alone, as he viewed wider participation in his business as an opportunity to spread his ideals. In 2013, he established the Solomeo School of Contemporary High Craftsmanship and Arts, inspired by William Morris and John Ruskin, to realise his vision of preserving craftsmanship for future generations.

In 2014, the Project for Beauty redevelopment initiative was launched for the creation of three huge parks in the valley at the foot of the Solomeo hill. The project repurposed part of the property occupied by old abandoned factories for growing trees, orchards and lawns. Supported by the Brunello and Federica Cucinelli Foundation, this initiative highlights the importance Mr. Cucinelli attaches to restoring the dignity of the land and the sense of duty he feels as its custodian.

Among his distinguished accomplishments, he was appointed a Cavaliere del Lavoro, or Knight of Industry, by the Italian president in 2010. In 2017, he received the Global Economy Prize from the eminent Kiel Institute, with a remark stating that he “perfectly embodies the figure of the honorable merchant.” In 2018, he was appointed a Cavaliere di Gran Croce, or Knight of the Grand Cross of the Order of Merit of the Italian Republic. In September 2021, he received the Designer of the Year award from men’s fashion magazine GQ. In October of the same year, he was invited to participate in the G20 Rome Summit to elucidate his idea of “humanistic capitalism and human sustainability” to world leaders.

The distinctive trait of his entrepreneurial activities has always been to offer work while fully respecting moral and economic human dignity. His company was thus conceived not only as a profit-generating entity, but also as a means for developing a capitalist model with human beings and their valorization at its core. 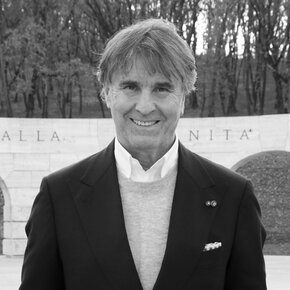